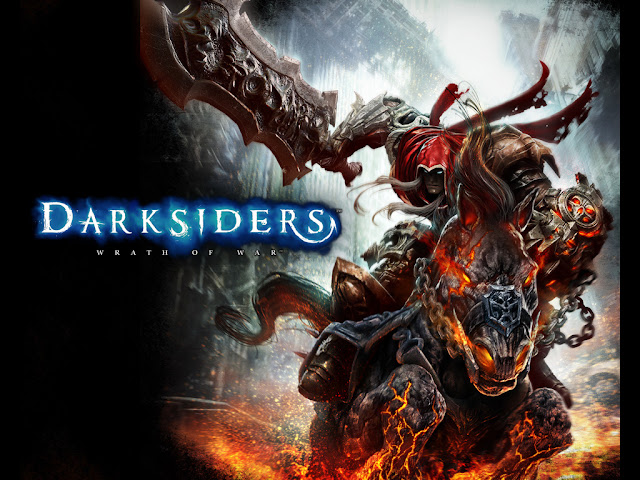 
Darksiders is a type of game that combines God of War style with The Legend of Zelda. To advance in the game you’ll have to kill hordes of demons and angels in a hack and slash combat style while having to solve puzzles and mazes where you’ll ultimately end up fighting the boss.


The game’s intro begins by telling you that heaven and hell have been always at war until an entity called The Charred Council, bound by laws to preserve balance and order, was drawn to the conflict.

The council was powerful and its enforcers were feared, a brotherhood known as The Four Horsemen, so both heaven and hell came to honour the council and a truce was forged. This truce was bound by seven seals that, if broken, would start the End War.

Then you see demons and angels falling from the sky in a contemporary world, fighting. After that you take control of one of the four horsemen, WAR, and the game begins.


The game features three difficulty modes: easy, normal and apocalyptic, they affect the health of the enemies as well as their damage output.

The graphics are detailed and fluent and the background music blends with the scenery. The battles happen in the world so you don’t experience any kind of transition starting or finishing one. You can focus on an enemy so you are always facing him and the camera is very easy to manipulate. When the enemies are almost defeated you get the chance to kill them with a special move pressing circle, there is no mini-game if you do that but the rewards are different.

There are several dungeons where you need to complete several tasks using items you’ve collected to unlock the boss battle. Boss fights consist in doing specific objectives to harm or to be able to harm them with your weapon, so you can’t just swing your weapon until its defeated.

You can explore the whole map at any time you want (except zones that you need a specific item to access) but there really isn’t anything else to do after you’ve completed the main story. You can, however, try to collect all the pieces of the abyssal armour, because once you get it you can use it right from the start of a new game.

The game let’s you use three different weapons, a blade, a scythe and a glove. All of them can be enchanted with enchantments you find in the world. There are also four legendary enchantments that usually combines some of the normal enchantments powered up. The weapons have a level system which increases its power and they level up by being used in combat.

Its possible to use consumables as well and special abilities that use a “mana” system called Wrath. Your health and wrath bars can be upgraded by finding the respective health or wrath shards.

There is a special NPC that allow you to purchase combat moves, upgrades, consumables and wrath abilities, using the in-game currency. This NPC is located at specific places in the world and you will be able to use those locations to fast travel.

The controls are simple enough but the aim and throw system can become a bit confusing if you’re trying to do it fast. Fortunately you’re not required to use it much.


For me, it is a good game. I’ve actually played it three times and got the platinum trophy, I think it has a good balance of cut scenes and playable time. The game isn’t very long nor short, which helps in its replay value.

There are a few things that I don’t like in the game though, you can fall easily from edges even if you are trying to jump over them, and if you’ve got the Power Strike move of your main weapon then sometimes you do it when you don’t want to and have to wait for the move to finish or to get hit.

The game could benefit from side quests and more NPCs because there aren’t many, although I think the world would have to be a little bit bigger for that.

Other than that, the story and gameplay were good enough to keep me playing for hours. The platinum trophy is fairly easy to get.


*RPVP based on GameStop retail price for PS3
Written by Regateiro