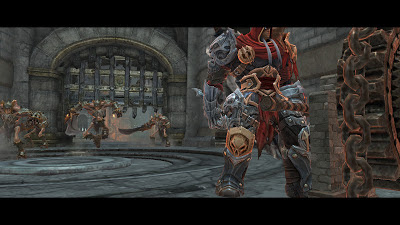 In Darksiders, a relatively simple hack-n'-slash game, you take the role of the Horseman War, falsely accused of triggering the apocalypse. The premise is simple: to cut through hordes of demons and angels alike, solve puzzles, and while you're at it, get some cool power-ups. Darksiders has been heavily criticized over the years as a God of War / Zelda ripoff, and I'm willing to agree on some points there. But, then again, even if I do agree that the game took most of its elements from those two other merchandises, it's also true that the resultant mix can be looked at as something unique. And in a time where originality seems to be dying, it's good to see that some studios are willing to try new combinations with ingredients that we're already used to. If it works for food, it might work for videogames. After all, videogames are "brain food" (some more than others, of course). After being presented with a short cinematic explaining the plot behind the happenings in Darksiders in one minute or so, you can begin your button mashing. In the early phases of the game you are presented with some hints, telling you how to do stuff. Still, there's really nothing complicated here, so you'll soon feel at home. In fact, after playing through the game twice (in different difficulties) the aspect I find most difficult to understand about this game is still the plot itself. If you get distracted for 2 seconds on the opening cinematic or in any of the first parts of the game you will be left behind and in complete confusion of what is happening and why is it happening. The opening cinematic just compresses a lot of information, and it takes concentration to understand everything that's being told to you. This of course, if you don't just skip the whole thing just so you can start slashing away sooner.  The comic book included might help a bit, giving some background info on certain characters and explaining the reasons behind some of the game's events. In a somewhat generic way, it all comes down to a war between Heaven and Hell that has been dragging on for an eternity, without any victory for either side. Then arrives The Charred Council, whose purpose is to maintain balance between both sides. For this they use the Four Horsemen (War, Death, Strife and Fury) to enforce peace and kick either side's butt when necessary.

Only later do the humans come into the picture, and since these are "still weak, but cunning" according to the Council, a truce is formed between the kingdoms od Heaven and Hell. The plan is to have the decisive war (the Endwar) when all three kingdoms are ready (the new kingdom being called the Kingdom of Men). The go-sign for the war being the breaking of all of the Seven Seals. All remains peaceful, until demons start raining from the sky. The war rages and War, the Horseman is summoned, but of course, he soon realizes that something isn't right. His brothers are nowhere to be found and Abaddon, general of the Heaven's forces insists that War shouldn't be there, since the seven seals were never broken. Eventually, War gets to face Stragga, a powerful demon, and it would have been a pretty easy fight for the Horseman, were it not for the fact that he had broken the law, by waging war with the seals intact. For this reason, his powers are taken and he is defeated. Saved from death by the charred council, War is accused of causing the apocalypse and of siding with Hell's forces (kinda stupid since all you do up until this moment is kill demons). War defends himself, and asks to be taken back to earth so he can find whoever is responsible for this and punish him, thus clearing his own name. The council agrees, but not without linking War to The Watcher, an agent of the council that is to keep an eye on war and kill him should he stray from his path. This is where the game truly begins.

Lets begin with gameplay. Combat mechanics are easy to get around, and this might be the reason many critics said the game is an excessive "press X to win" experience. While correct up to a point, I wont agree on it being boring or too easy. After playing other games of the same kind that contain an abusive amount of skills and button combinations you need to memorize to play decently, I felt Darksiders was more "light"in terms of what you need to learn and use. There's not that much variety in what it comes to tactics, certain enemies require you to hit and run to be able to defeat them and leave with your health intact (at least if you're playing in a higher difficulty) and bosses aren't too difficult. Additionally, if you don't rush headlong into them you can defeat them in your first try with little trial and error. This helps keeping the game's difficulty balanced. The Amount of weapons feels insufficient, even though with the experience needed to level up each one, it's unlikely you'll reach the end of the game with more than one maxed out. Weapon enhancements are very well hidden, and some require backtracking to find, once you obtain certain abilities. Thus, 100% completion is very hard without a guide. Graphical options, once again, are the ones we're used to in console ports: resolution and a v-sync switch. The graphics however, are pretty polished and the game runs smoothly on any decent computer. As for bugs, nothing to point out. 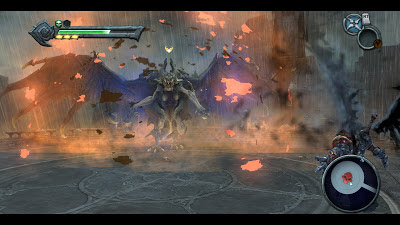 Cut-scenes though, are pre-rendered at a lower resolution and quality, so if you are playing in 1080p, you'll definitely notice that. It's quite annoying, since they could have just used the game engine to do that in real-time at whatever resolution the game was running at. Having cut-scenes with less quality than the game itself is annoying. As for longevity, the game is considerably long, and the dungeon maps can prove to be really confusing, should you need to backtrack in order to get hidden power-ups or valuables. Some achievements require an awful lot of grinding as well and the Dark Rider achievement is just ridiculous. I had to put some rubber bands on the controller's analog sticks and let the character go around in circles for several hours to get it. Some abilities, such as Stoneskin have an abusive cost, there's no way you're gonna rank up even one of them to its highest state if you don't grind souls for hours. Even after getting every single chest in the game and grinding for some achievements, I didn't manage to get any ability to maximum rank. Good thing there isn't an achievement for that.


With Darksiders II out now, I'm expected to see the first game getting some more sales within the next weeks.I haven't played the second one yet, but I can only hope that there is more to do than the main storyline. Because Darksiders tends to turn into a boring desert after you finish it and there simply is no reason to keep playing it. Nonetheless, it's a good and solid game, and a starting point for what could become a big franchise. Hopefully, we will see it getting out from underneath the skirt of its older brothers and developing into something unique, shutting up the naysayers.