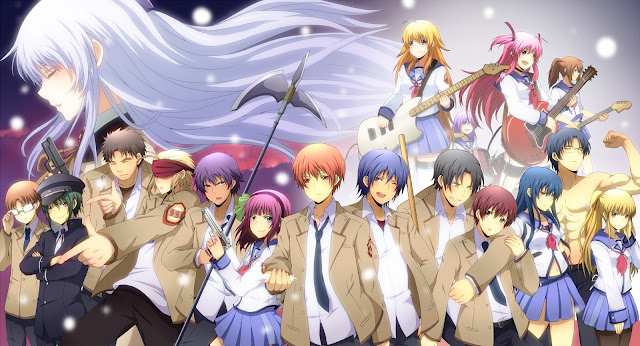 Angel Beats made its way to me as a sort of preparation for the anime seasons of 2013. I’d been checking previews for upcoming shows, when I came across two PA Works anime: one adaptation (Red Data Girl) and one original anime (Nagi no Asukara). I wasn't very sure what kind of quality the studio delivered, or the genres they were most popular with, so I went and checked for other PA Works anime. Shockingly, I’d only ever seen Canaan - which despite some amazing graphics wasn't as good as I had anticipated - and Another - which started nice but didn’t quite make it to awesome. In any case, Angel Beats was a sounding name, and I remembered people suggesting it as a tear-jerker. Supposedly it has, on these terms, been compared to Clannad. Regardless of my skepticism concerning this fact, I sat down and watched it in two sittings.

Attention: This review is not spoiler-free!

For those unfamiliar with it, this series is a slice-of-life, with drama and comedy in equal amounts and a dash of supernatural. When I say a dash, I mean that everyone in this series is as dead as they can be, and they go to a school which is, basically, the afterlife. The starting point is the moment when Otonashi, a teenage boy, wakes up amidst a battlefield, only to find that not only is he dead, but he has to fight if he doesn't want to disappear for good. With this purpose in mind, he joins Yurippe, the resistance group leader, and her underlings, who conduct the fighting against a girl they call Angel. Thing is, Otonashi doesn't remember his life, so why is it so bad to do as Angel says, even if it means disappearing?

First of all, I very much enjoyed the main idea. It felt fresh yet comfortable, original yet respectful of the genre. I guess that’s what happens when you use common human emotions and some situational clichés people can recognize. Of course, I wouldn't advice diving into Angel Beats expecting the innovation of the century. It’s pretty easy to guess where it is going, and I don't imagine anyone taking too long to realize what Angel really is. In fact, from episode 2 on I had it clear in my head that people disappeared when they felt at peace and fulfilled. It was also disappointing to notice that supernaturalism didn't take much place in the story, except to allow people to die more than once in comic situations. Admittedly, most of the comedy was fine and Yuri's weird missions made it worthwhile.

Still, what Angel Beats lacks in surprise effect is mostly compensated in nostalgia. Everyone gets their favourite characters in a series, and those are the characters you don’t want fading away because they are interesting. At the same time, getting closer to their resting in peace means getting a bit more of their pasts. I wonder if at some point in the series they decided not to use this effect so much, because they started strong and took a wrong turn until the last couple of episodes.

Allow me to explain. 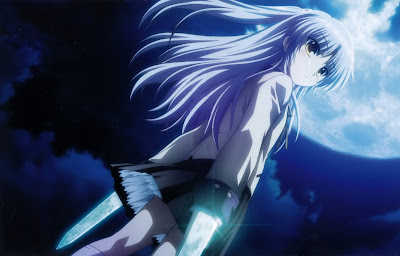 In the very beginning of the series, Yuri tells Otonashi why she has such a grudge against God, and it was so shocking. However, every time another character revealed his or her regrets, I compared them with Yurippe's suffering and they started looking less convincing. That’s pretty much my only problem with the pacing - I was supposed to get sad for other characters but it was difficult to find it rough on them after Yurippe. It would have been perfect if they had paced it in a way that her story came after some softer ones.

Another thing I would have changed would be the climax. People just disappear all of a sudden, without speaking of their pasts. And in a couple of episodes there’s nearly no one unfulfilled around. It’s just… well, waiting for the evident outcome for 2 whole episodes. And there’s this weird part with the NPCs being reprogrammed into shadows and a showdown with this random guy in a computer room all of a sudden, that was completely forced into the story.

However, the end concerning Otonashi and Angel’s connection managed to catch me off guard yet again, which gave a nice finishing kick to this series. It's always reassuring to see how ends meet.

There were some characters that left a strong impression, especially after you learn their stories, which despite being sad, add the required depth to their personalities. However, I was left feeling that the characters who didn’t get their own arc were incredibly vacuous. Don’t get me wrong, they were still funny elements and  they were distinct from each other, but they felt like were there to add up to comic relief. That’s even truer, for me, for the, whashisname… the glasses guy. Takamatsu. From the moment he was established as the guy who stripped to reveal a built body, there was no end to it. That’s all he got to do. I was a bit disappointed when I realized I wasn’t going to learn about the past of most of the character cast. It worked  as a 13-episode series, so I guess there was no much time for more character development, but for me as watcher it was a drawback.

Yuri and both GirlDeMo vocalists did it properly, though - they were the ones who lured me in in the first place, creating the expectation of getting more depressing but wonderful stories.

Angel is pretty rad too. Given the fact that her first impression is that of a android-like emotionless killer only there to assure everyone disappears and reincarnates, and the time they spent trying to get in her way and kill her, it is interesting that she turned out to be the awkward type girl instead of some super-human being. I don’t think this transition was perfectly accomplished, to be honest, because it didn’t feel smooth. Still, 'twas kind of cute.

Now Otonashi’s story... I have to take my hat off to that one, because it was very well planned out. You get it in bits, very slowly. I never saw it coming. From the amnesia-struck boy who had no special traits apart from being saner than the rest, to the person who had no motivation in life except for his hospitalized sister. To the fact that he decided to study medicine when she died. And then, the train accident just when he was about to enrol. How much he did for the people who were stuck underground, at his own cost. And realizing he’s such a beautiful person that he died after accomplishing something equally beautiful. This very special development got him the spot of my favourite character of the series. 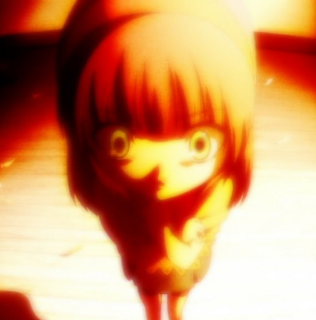 At first, the art doesn't really stand out. I mean, it’s nice and all, faithful to the feeling of the series, but it’s not in any way different from most of the genre. In particular, the male character designs feel average. That didn't change much throughout the series, but the longer I watched, the more aware I become of all the care that went into the animation rather than the art.

It’s the attention to detail that gets you, in the end. Angel Beats might not have the most dazzling or shocking style, but they really thought it through. Take, for instance, how Angel looks slightly absent and unemotional but pretty, opposed to how the stupid students make sketchier faces all the time. And, yet again, Yuri's backstory. The way you see her and her siblings is different from all the other scenes. Her eyes are huge as she frantically looks for a way to save everyone, whilst the whole setting in mostly yellows and sepia, which gives it a sickening look. The yellows only make it more disturbing when there are red bloodstains on the wall and then the scene blacks out. The angles were very well chosen. It felt intense. Other serious sequences got the same care, although not as successfully distinctive as this one.

It might not be a perfect 10-out-of-10 animation, it might not be gorgeous all over, but my view is that it’s very well in tune with the rest.

Most of the mainstream anime series have known seyuu, and Angel Beats was no exception. If you watched Ao no Exorcist, I'm sure you recognized a voice every couple of minutes. But that's not all. Otonashi is voiced by Kamiya Hiroshi (Izaya from Durarara!, Mephisto from Ao no Exorcist, Araragi from Bakemonogatari, to name only a few), and Angel is voiced by Hanazawa Kana (Mato from Black Rock Shooter, Shiro from Deadman Wonderland, Kobato from Kobato). Really, the list just goes on and on, with people like Kitamura Eri, Ogata Megumi and Nakahara Mai adding up to the high-budget cast. There's also some less known seyuu, like the one who did a nice job voicing Yurippe - Harumi Sakurai.

More important to me than that is the music. It's what you'd expect from this sort of series: all kinds of tracks, from very dramatic ones to slow and sentimental tunes. It even has a track close to the Jaws theme, which I'm pretty sure was used to create mock tension in a funny scene. Moreover, a soundtrack fanatic like me can only be glad when an anime brings two soundtracks in one, and this one does. Apart from the instrumental themes, there are the Girls Dead Monster insert songs, and I have to say that I really got into GirlDeMo. They added a special kick. Particularly Yui's versions are very powerful. Her speaking tone might be annoying but LiSA, who did the songs, was fantastic in giving her a singing voice. Particularly Yui's last song (Ichiban no Takaramono) makes me get all nostalgic and mellow. I also consider the band's rendition of the Opening and Ending themes better than the original versions, which I only learned to enjoy overtime.

I don't feel like Angel Beats is lacking in this department. Are there funnier, more amusing and more entertaining shows out there? Surely. Does that make it not worth watching? No way. There are plenty of opportunities to crack up, a couple of opportunities to shed a tear. Frankly, it's addictive. Didn't I say before I watched it in two nights? And I could have made it one. Even those episodes that didn't cut it to the chase didn't stop me just NEEDING to go on. In the end, that's what people watch anime for - to have fun with a nice story. And so I did.


Quick note concerning the Specials: While there are certainly good OVA and Specials out there in the Anime world, the Angel Beats ones don’t deserve a place in the spotlight. I scored them 7 out of 10 because you can’t really say the animation got worse, or that they don’t keep the same characters or soundtrack, otherwise I would have scored them lower. They are, to put it mildly, highly unnecessary. The first special is a poor attempt at a full-fledged comedy episode, while the second doesn't even try to go longer than a 2 minute short. When I read the description of it being an alternative ending with Otonashi staying behind to help other kids moving on, I was enthused, but 2 minutes aren’t nearly enough to show that. You just get a minute of him yelling at a random angsty student, before he walks away to the student council room, all the while looking cool and nostalgic. So, please, pay no attention to those and just watch the TV series.
Written by Miana