Durarara! is one of those anime masterpieces it’s rare to come across. As such, having picked it up randomly halfway through a fall season felt like hitting the jackpot. I’m sure those who watched it at that time know how tough it was to wait for the next episode weekly, how exhilarating it felt to see the pieces falling into place and linking the individual stories into a bigger, more intricate pattern. Much alike weaving a tapestry where the drawing could only be seen fully by the end. I’m sure many would disagree, but personally it remains to this day one of my top favourites.

Attention: This review is not spoiler-free!

Durarara’s plot is hard to narrow down to the essential. It is, after all, made up of several individual stories. That’s not to say that the plot is all over. It focuses on a trio of characters – Mikado, Kida and Anri - who are classmates, and it’s their meetings and adventures that shape the core of the story. It’s also deeply affected by the existence of a Headless Rider, a Dulahan. It is one of those plots that are defined really simply: people meet. Stuff happens. Some people part, some people miss each other, others are caught up in things that aren’t supposed to be possible. Try it, really: watching just the first two episodes will give you no clue about what will happen the rest of the series. Or rather, it will, but you won’t be able to see it.

Similarly, it is incredibly hard to include it in a specific genre. It has a bit of everything, from mystery to romance, to comedy and drama. This broadness is certainly part of what makes it so unique and so appealing to many different types of watchers. In fact, I’ve suggested this series for people with little interest or knowledge of the anime world, only to see them hooked in three-episode’s worth of time.

I like to think of Durarara as a tale made up of character-centered worlds. For the most part, you can only see that world, and even as you’re introduced to more worlds they’re just separate spheres to you. But as your vision broadens and they expand you start to watch them collide and interact.

It is unfortunate that the series exists as a stand-alone as of now, since there are some loose ends waiting to be picked up and some characters we didn’t get to learn about yet. Fret not, though: the series has an ending. It doesn’t leave everything hanging and concludes Kida’s arc. But my personal opinion is that every fan would like to know what Orihara Izaya has in store, how Celty’s head is going to play out and how will the others be manipulated and played. 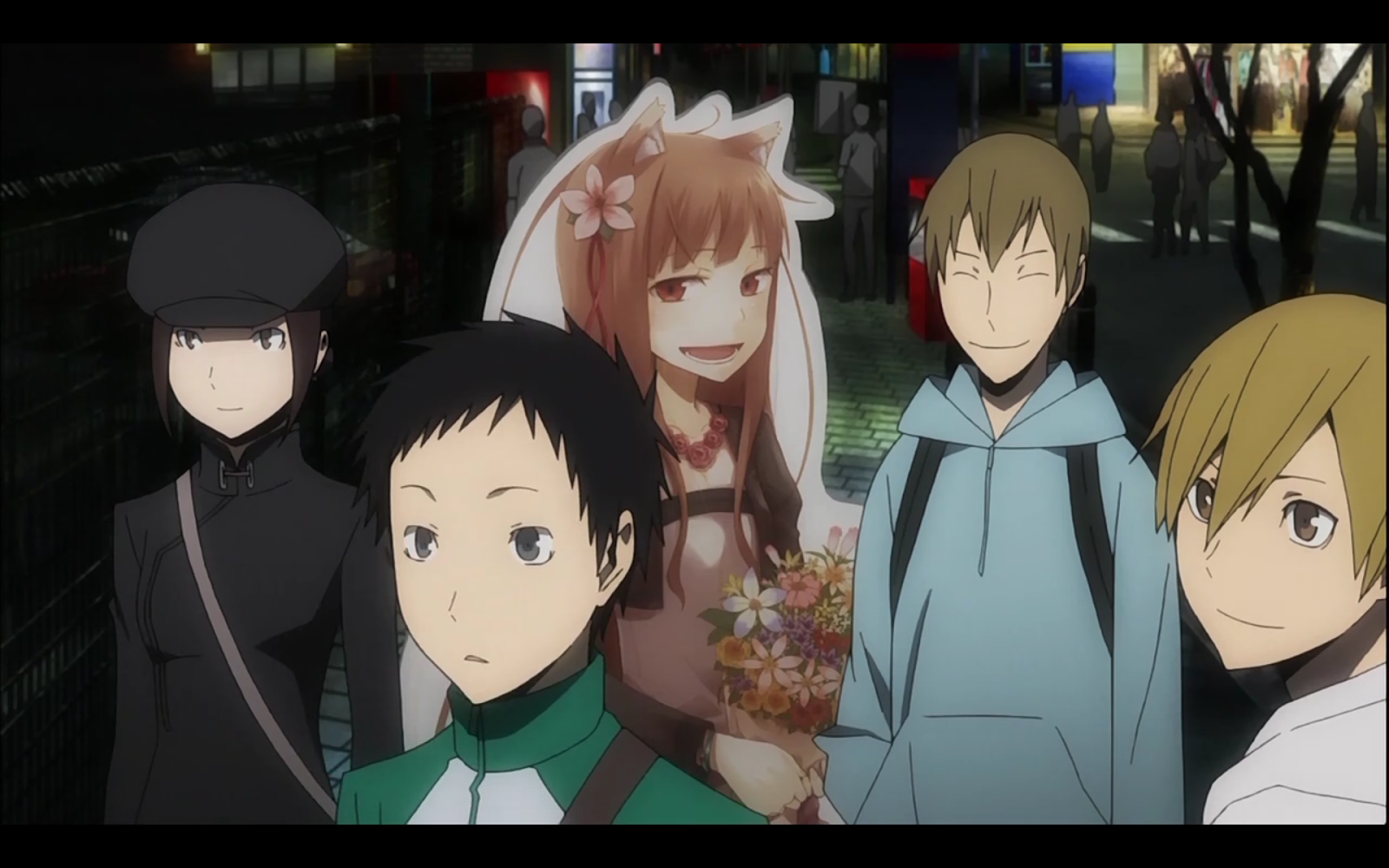 The thing that Durarara does best – and it excels in nearly every area – is characterization and character development. I have a very hard time choosing my favourite character, and even a harder time choosing a least favourite one. Admittedly, I have a thing for Izaya. But I love Shizuo just as much. And Celty and Shinra (especially their couple-like interaction). And Kida. And Harima Mika, even though she’s a stalker. Even Mikado who looks so half-assed at the beginning is much more than he appears to be, and the same with Anri.

My point is…. Good or evil, flamboyant or discrete, they’re interesting, they’re captivating. Every character is layered, amusing and rich. Every character has undertones that you didn’t see before, and you see it in a new light after a while.

For me that’s particularly true for Anri and Mikado. Anri’s apparent lack of personality and willpower struck me as deeply unlikable, thus I was positively impressed when her whole backstory was revealed and she was shown to be Saika’s master. After all that mess, she became a better character as she decided that, even if her existence was of a parasite, and voluntarily so, she would try to do what she could to help her friends. Mikado, on the other hand, was not unlikable from the start. He just looked naïve, the typical main character that ends up being dragged into an adventure. He would have been alright like that, just nothing other than a cliché. However, he was not. He was curious, smart and bigger on the inside than on the outside. More importantly, he was the leader of the Dollars.

Apart from these two revelations which made for incredible episodes, I loved Kida. I loved every side of Kida, his faked irresponsibility and carelessness, his serious face when he got back as the leader of the Yellow Scarves, his dark past, all of it. He’s rather complex, and even when he’s just being silly for Mikado’s sake, you get these delicious hints that something is hiding behind the mask.

All of them left not only a lasting impression in me but I cherish them and remember scenes and quotes from time to time. For all of these reasons, Durarara’s characters get a top mark.

Honestly, there isn’t much to complain about in this department. I know that not everyone enjoys the style of animation that Durarara has, but for me, it was the perfect complement to the rest of the series. Even now, years past, Durarara’s animation is clean cut and pleasing. It’s fluid, natural, while remaining bright and eye-catching. It’s believable while retaining a hint of unrealism, which goes well along with the supernatural bits of its story. It might not look out of this world based on the current art trends, but at that point it won easily over its competition.

Conceptually, one of the bits that really caught my attention was Celty’s design. Particularly due to the fact that being headless meant that her body language had to be incredibly detailed. I take my hat off to the animators for making it so, and even going to the trouble of making her smoke vary with her emotions. The animation is even more outstanding when it comes to the materialization of the scythe. Celty is pretty much the only character that is not human, so I would have to consider myself disappointed if the animation didn’t reflect that. 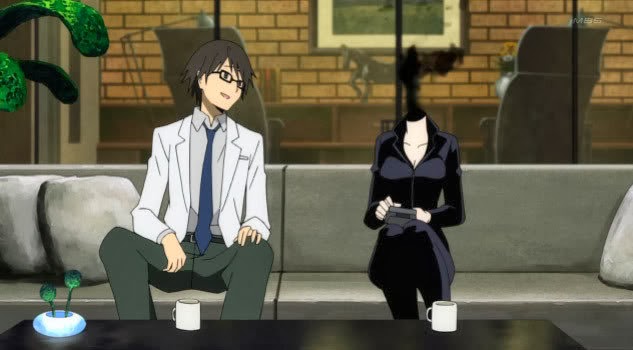 Character’s designs are very different in style, race and build which is pleasant to see. It’s not often that we get a character like Simon, for instance. He’s way broader and taller than the rest, his accent is different and there’s even a bit of Russian in episode 24. It was also amusing that, for a change, Kida’s hair is said to be dyed right in episode one, instead of weird hair colours being considered normal as it is so in many other series.

The action scenes have their own style of animation. In that regard, I remember vividly every Shizuo scene, mostly because he tends to pick up giant city objects to throw them around. He battles Saika’s children all at once. He gets shot and doesn’t even care much. And finally, he is stabbed through his hand with a pen. Every scene with Shizuo is likely to be a memorable one.

As everything else in Durarara, the music and voices were thoroughly considered so they would fit the characters and overall tone. The soundtrack, composed by Yoshimori Makoto, has fun tracks, fast-paced ones, silly sounds and creepy tunes in equal amounts. I like to listen to it from time to time, even if at some point it gets too disturbing and distracting to go on. Their insertion in the series itself is genially executed, to the point that one can’t even realize its presence sometimes, albeit still feeling its powerful effect.

As for the voices, the high quality is evident in the choice of seiyuu, since nearly every popular male voice-actor has a part in the series. These people all know how to give a character identity just by changing the way they sound. I can’t avoid mentioning Ono Daisuke (Sebastian in Kuroshitsuji, Sinbad in Magi) as Shizuo, Miyano Mamoru (Yagami Raito in Death Note, Tamaki in Ouran High School Host Club) as Kida, Fukuyama Jun (Watanuki in xxxHolic, Lawrence in Spice and Wolf) as Shinra, and Kamiya Hiroshi, the god of male voices (Araragi in Bakemonogatari, Natsume in Natsume Yuujinshou, Levi in Shingeki no Kyojin), as Izaya. As for the ladies, it would be rude to forget Hanazawa Kana (Kanade in Angel Beats, Shiro in Deadman Wonderland) as Anri, and Sawashiro Miyuki (Maria in Arakawa under the Bridge, Shinku in Rozen Maiden) as Celty. Celty's voice actress gets the most honorable mention for conveying emotions perfectly without the help of character's facial expressions.

With all of these golden voices, it’s no wonder that Durarara’s characters shine brighter than any others.

I’ll come clean right here and now and tell you that I prefer Durarara over Baccano. I had more fun with it, I like the way the story connects way more, and I bonded the most with its characters. I recommend it to everyone I can and have rewatched it more than once. Honestly, I couldn’t have asked for something more enjoyable than this, and haven't seen anything alike since then.

Ultimately, Durarara is a story of a city. With many different people and situations. With its own urban myths and problems. To quote Izaya, “human beings are the most interesting creatures that you can ever hope to find”. I also love humans, and I appreciate a story that can present that to its fullest.

The Specials: This series has good specials, those that are worth watching. While not essential to the main plot, they are introduced seamlessly into the time-line, corresponding to episode 12,5 and 25. They aren’t worth a 10/10, but they’re good fun. You get more Izaya vs Shizuo, more of the same fun without any drop on the animation, sound or character quality. However, it goes without saying that there’s less depth to it. They would be a good standpoint to introduce a new season, nevertheless, as there are new seasons being introduced, such as Izaya’s younger twin sisters.
Written by Miana