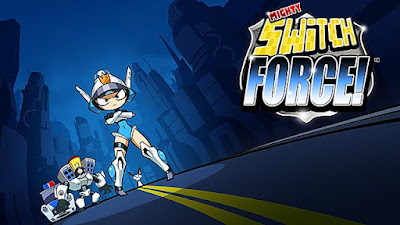 Mighty Switch Force is a series that managed to keep my brain entertained for quite some time, and after buying both games on the 3DS e-shop, the puzzle speedrunning-mania started.

Diving straight into the action, MSF doesn’t really have much in the way of plot or story line. A series of hooligan girls escapes from prison, and it’s up to you, the android police Patricia Wagon to recapture them. For this she will have to use a system who allows her to switch blocks that are in the foreground of the scenario to the back and vice-versa. This makes it possible for Patty to clear the way and advance, providing her with solid ground where she can stand on.

Every level has five Hooligans you must find, after which your robot partner/vehicle drops somewhere in the level, where you must meet him to finish the level and stop the clock. The bottom screen shows a helpful radar pointing you in the direction of the Hooligans, as well as your lives and health points.

In the 3DS version there are at least two different buttons mapped to the switch mechanic. Personally I prefer the R button, since it leaves my right thumb free for jumping and firing.
The weapon, an energy gun of sorts, is mostly used to take out smaller enemies, destroy certain blocks, and to push bigger enemies onto specific spots, where you then use them to solve parts of the puzzles. In the second game, the energy gun is replaced by high tech Hose, à la Super Mario Sunshine.  It’s used to destroy the same type of block that can be destroyed in the first game, put out fires and douse burning enemies. It’s also often used to pump water through pipes, for puzzle solving purposes.

Switching, in most cases, must be used with the correct timing starting on the very first level, and as the game advances, the timings become tighter and harder to nail. This, aided by the fact that the levels become more confusing as new elements are added, makes sure that the difficulty ramps up throughout.

And if the first game wrinkled your brain, the second does a good job of further messing it up. More elements are added, level layouts become bigger and more confusing and some previously existing obstacles have an additional layer of complexity added to them.
Par times, however, are whats reponsible for my extended playtime: adding a bit of speedrunning into the mix, every level has its own par time, and beating it can be quite a challenge. A lot of memorization and good timing is necessary to clear each level (and a series of attempts), and some par times are so tight that even a minor slip can make it impossible to reach the end fast enough. Not to mention that, as said above, the clock only stops the moment you get to your robot partner. That being said, every time you beat  the clock, you get a lot of that familiar feeling of satisfaction, and once you beat them all you get a pretty nifty unlock, which I’m not going to spoil.
Graphics are good enough even on the 3DS version (the 3D effect is superb), and everything looks very clean and sharp on the PC version. Design-wise, the game is as good as you might expect from Wayforward, which is to say, pretty good.
The soundtrack will stay in your ear for quite a while, courtesy of Jake Kaufman (Ducktales Remastered, Shovel Knight, Shantae: Risky’s Revenge).


Overall, a nifty puzzle game that will make you think and think fast. If you just enjoy leisurely solving the puzzles you can do that, but if you like the challenge of speedrunning, there are entire communities dedicated to sharing level times and beating others’ level times. Perfecting the levels will most likely triple the amount of time you need to clear the game, effectively giving you more for your money (if you’re into that sort of thing). I bought them very cheap on a sale, but their current full price is pretty low. If you have a 3ds and like puzzles and/or side scrolling platformers, this game is for you.