The Bear, by Claire Cameron 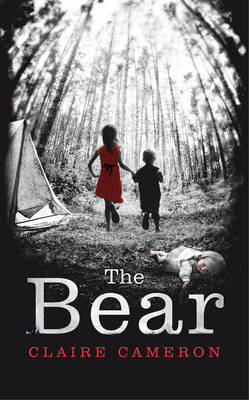 A powerfully suspenseful story narrated by a young girl who must fend for herself and her little brother after a brutal bear attack.While camping with her family on a remote island, five-year-old Anna awakes in the night to the sound of her mother screaming. A rogue black bear, 300 pounds of fury, is attacking the family's campsite, pouncing on her parents as prey.At her dying mother's faint urging, Anna manages to get her brother into the family's canoe and paddle away. But when the canoe dumps the two children on the edge of the woods, and the sister and brother must battle hunger, the elements, and a dangerous wilderness, we see Anna's heartbreaking love for her family--and her struggle to be brave when nothing in her world seems safe anymore.Told in the honest, raw voice of five-year-old Anna, this is a riveting story of love, courage, and survival.

A camping trip with her parents and younger brother was meant to be a treat, not a nightmare. When hidden with her little brother in the middle of the night by her father, five-year-old Anna could not imagine that the world as she knew it would be gone forever. Even as she stepped out of her hiding place, as she saw her mother's broken figure and her father's loose shoe, she did not understand that the sounds of struggle that kept her awake during the night told the story of her parents' deaths.

At the order's of her dying mother, Anna takes her brother Stick into a canoe and paddles away from the last place she ever saw her parents, away from the black bear who ate them, and into a place where she will have to be mother and sister to Stick as they try to survive in the wildness.

Told from Anna's perspective, the childish speech can sometimes be difficult to get into. However, once submerged in it, Anna's voice becomes clear and unique to the point where one's inner reading voice actually becomes that of a child.

That does not mean that the "adult reader" disappears. In my case, at least, during the first half of the book, the innocence with which Anna took things made me fear for the siblings. In everything they did, everything they saw, I conceived a deadly trap. This and the fact that most chapters ended with a cliffhanger of one sort or the other kept me from closing the book. That is, until I reached the middle.

Indeed, it felt like the pacing slackened and that the author was fishing for things to add to the story to make it a little bit longer. There were numerous flashbacks to Anna's past that did little to advance plot or characterise characters, a few repetitions of said flashbacks, and a number of monologues that seemed to be senseless (perhaps a product of dehydration and hunger? I'm not certain). It was tempting to skip full chapters to see if something would happen, which, in my case, happens very rarely.

Having said that, the story picked up again in the final part, thus allowing the novel to be wrapped up nicely and with some very interesting situations. Nonetheless, I would have preferred to read a little more of those last moments. At least I would rather know more of the end of the story than the middle of it.

The Bear is an entertaining thriller with the right touch of drama and comedy, and a great portrayal of the relationship between siblings. However, with such a premise, I am sure that Cameron could have done a little more to keep the blood running.

"My whole body has gone away because I am one and that is not enough to be in a family so I am lost too. I got left behind."
Written by Tess @ Tessellated Tales