This House is Haunted, by John Boyne 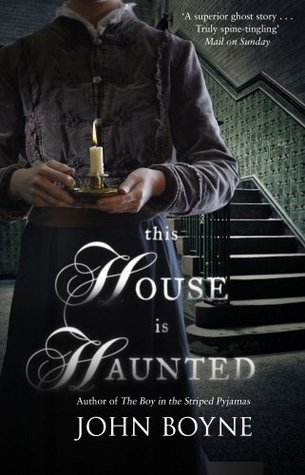 1867. On a dark and chilling night Eliza Caine arrives in Norfolk to take up her position as governess at Gaudlin Hall. As she makes her way across the station platform, a pair of invisible hands push her from behind into the path of an approaching train. She is only saved by the vigilance of a passing doctor.

It is the start of a journey into a world of abandoned children, unexplained occurrences and terrifying experiences which Eliza will have to overcome if she is to survive the secrets that lie within Gaudlin's walls.

Eliza Caine is twenty-one when she becomes an orphan. With no family to speak of and a need for fresh sights, she takes off to Norfolk to be a governess. She does not know who her charges will be, their ages, or anything about what their education is to be. When she arrives at Gaudlin Hall, after an incident at the train station, she is met with two peculiar children and no adults to speak of. Who then posted the advertisement for the position in the papers? Why do the people refuse to speak of the house and the children's parents? And why does Eliza feel invisible hands threatening her?

Let me begin by saying that I'm not certain as to what this book planned to accomplish. Was it to be another gothic horror story? A formula of the old books? Or a parody of it? Thus far I have read opinions on both sides, and neither has had me convinced. However, seeing as I didn't think it a parody until I saw reviews suggesting it to be one, I'll treat it as a gothic story.

And so, This House is Haunted falls under a formula. There's a young school teacher with no family who takes place as a governess in a old house that is falling apart, there are secrets in the attic, the villagers don't want to speak of the house or the tales of the past, the main character is eventually seen as mad and takes too long to figure out what's happening, the haunting is traditional, etcetera, etcetera. If there's a new side to the genre in this story I completely missed it.

As a formula, the book works quite well and is fairly entertaining. It spooks in the right moments and keeps the reader curious about what will happen next. Until the cliché becomes too... cliché. Until Eliza and the rest of the cast remind us so many times that she is a woman that it becomes annoying. Until you see the next plot twist 50 pages before it happens. Until you realise that there are no proper bonds between the characters to support many of their actions. Indeed, on this last point, it must be said that, although Eliza often says she cannot leave Gaudlin for the children, there are very few moments of interaction between the three. Those that exist do describe their mutual feelings quite well, but the children are two-dimensional and there's no proper sense of relationship between the two and between them and Eliza. Sometimes I even forgot the children belonged in the story.

Another issue I had with this book lied in the prose itself. Although at most times it was pleasant, in others, it felt clunky and not at all natural.

Despite its many faults, I did overall enjoy reading This House is Haunted. However, it is not revolutionary novel or anything to tip off your hat to.

“There is cruelty in the world Eliza, you can see that, can't you? It surrounds us. It breathes on us. We spend our life trying to escape it.”
Written by Tess @ Tessellated Tales