Angel on the Ropes, by Jill Shultz 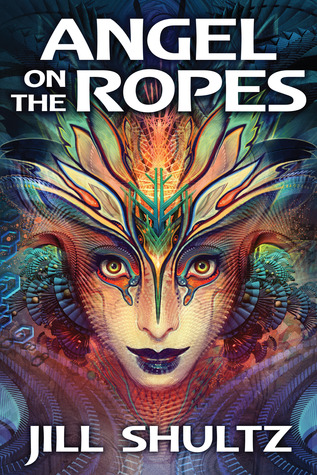 An incomparable trapeze artist who lives to fly is about to hit the ground—hard. Amandine Sand walks a high wire between two lives—hobbled by a life-threatening secret. She’s a leopard, one of the spotted humans wrongly accused of being a plague carrier. Leopards like her are hunted by zealots to protect their offworld colony from the scourge. Despite this threat, Amandine spends her days guiding other leopards to an underground shelter run by the pacifist Seekers. At night, with her own spots hidden, she takes to the air, the one place this extraordinary artist feels free and gloriously alive.When the persecution of leopards explodes into widespread violence, the Seekers demand more of her time. But her circus is teetering toward bankruptcy and desperately needs her, too. She has no time to breathe…and then she meets a stranger who leaves her breathless. And might just be the biggest risk of all. If her trust is misplaced and she’s unmasked, everyone she loves—and everything she’s fought for—could crash.In her darkest hour, Amandine must draw upon everything she’s learned from the circus and Seekers to bring peace to her fractured society. Can a reluctant angel fly beyond her limits to save her life, her love, and her world?

In the Earthern colony of Penance, Amandine has no other choice than to keep a great secret: she was born a leopard. There are spots in her skin that resemble symptoms of a disease that plagued humanity, spots she must hide. After all, the same people who say leopards carry the disease are the same people who won't regret killing them. Purity is all that matters. And so, Amandine hides her spots under layers of make-up and the lights of one of the most famous circuses of Penance, where she flies with the help of her trapeze and her heart-brother Jango.

For years, all seems to be going well. She is part of the Circus of her dreams and even manages to save some leopards from the hands of the Plaguellants. But, as always, things begin to unfold. The Circus is in need of money. The leopards she attempts to save in one of her runs are murdered before her eyes. Everything is collapsing, and she does not quite know where to turn to.

Seems simple, doesn't it? Well, it begins that way, but as the book develops the story becomes increasingly complex. To the holocaust-like issue, others are added: healthcare, invasive species, other environmental issues, sociological problems, etcetera. It is, I dare say, when these side issues become more relevant that the book begins to shine. Sadly, it's only halfway through that the book picks up.

Before then, I must admit the story did not particularly appeal to me. Only a determination to keep going kept me from putting down the book. Why? Because, despite the fact that Angel on the Ropes successfully avoided "info dumping" for its worldbuilding, it did not manage to do it without confusing me thoroughly. I was convinced, for example, that Amandine being a leopard meant one of the following: like a werewolf turns into a wolf-like creature under the moonlight, she turned into a leopard under some other stimuli; she could turn into a leopard at will; she was a sentient leopard; she was a leopard/human mutant of some sort. I just had to find out which of the options was the right one. Figures none of them was. It merely meant her skin was different. Likewise, there are still many a thing that I know not what they are as Shultz never fully described them. Shultz did manage to create a brand new, believable world with rules and intricate problems of its own that still mimicked ours in its own way for obvious criticism purposes. And yet, she failed to create one where the reader could be fully immersed. Or at least, one where I could be.

Then, there are the characters. Flawed and interesting in their own ways, they go through clear character development. Some of them, far too much. Indeed, a handful of them seem to become a completely new person altogether by the end of the book. Can someone in "real life" go through such change? Perhaps, but very rarely and under far different circumstances. It did not feel realistic. A shame, as it's clear to see what Shultz wanted to show, which I am sure she could have done with some more editing.

And it's not just there that the book could do with more tweaking. I don't know if this is intended to be the first book in a series, but regardless, there are quite a few subplots that remain unresolved. Now, I'm all up for open ended books, but even those must have some closure on the sides. The invasive species subplot, for one, would be nice to see resolved.

Yet for all the flaws in Angel on the Ropes, there are two major points I must applaud the book for: 1) the scientific explanations were believable for once, which is quite rare in my experience, and 2) the LGBT+ side of the story was done perfectly. It was wonderful to see bisexual characters who clearly read as so, and to read a story in a world where sexuality was not cause for prosecution.

I only wish the book had flown as well in all other aspects.