The Museum of Extraordinary Things, by Alice Hoffman 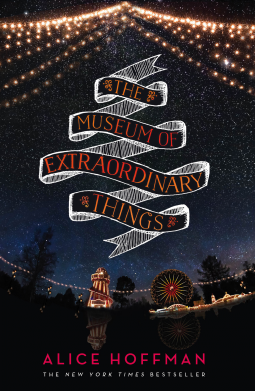 From the beloved, bestselling author of The Dovekeepers, a mesmerizing new novel about the electric and impassioned love between two vastly different souls in New York during the volatile first decades of the twentieth century.Coney Island: Coralie Sardie is the daughter of the impresario behind The Museum of Extraordinary Things, a boardwalk freak show that amazes and stimulates the crowds. An exceptional swimmer, Coralie appears as the Mermaid in her father’s “museum,” alongside performers like the Wolfman, the Butterfly Girl, and a one-hundred-year-old turtle. One night Coralie stumbles upon a striking young man photographing moonlit trees in the woods off the Hudson River.

The dashing photographer is Eddie Cohen, a Russian immigrant who has run away from his father’s Lower East Side Orthodox community and his job as an apprentice tailor. When Eddie captures with his camera the devastation on the streets of New York following the infamous Triangle Shirtwaist Factory fire, he becomes embroiled in the mystery behind a young woman’s disappearance.

New York itself becomes a riveting character as Hoffman weaves her magic, romance, and masterful storytelling to unite Coralie and Eddie in a sizzling, tender, and moving story of young love in tumultuous times.The Museum of Extraordinary Things is Hoffman at her most spellbinding.

Throughout her short life, Coralie has known little more than the house she was brought up in, and the river, both wonders to her eyes. For the house lies next to her father's museum, a building filled with wonders of nature: people, animals, plants, and minerals too extraordinary to speak of. As for the Hudson, it was the one place where she felt free, with the water caressing her skin and the fish believing her to be one of them.

Eddie Cohen, however, knew only grief and anger. A Jewish immigrant from Russia, he was overworked as a child for a few mouthfuls of bread while the boss's children wore golden watches and expensive coats. In a world of lie and inequality, he is forced to grow up too soon. Yet there is solace to be found. In a camera, a ferocious looking dog with the temperament of a rabbit, and fishing.

Water leads them to one another, but not in a way they'd expect. After all, it's 1911, and the world is changing.

This is my first Alice Hoffman book. It has left me wondering why I never read anything of hers before. Whilst the prose itself is not the most beautiful I have ever read (that honour goes to Pat Rothfuss's The Name of the Wind), it was still as solid and fluent as the river. The usage of symbols, of the dichotomy of water versus fire, helped the story unfold with a poetic touch. Plus, the fact that I did not mind the little amount of dialogue says quite a lot, as a lot of internal monologue normally puts me off.

But I dare say nothing else could have worked as well. Despite the elements of magic realism, this is foremost a very human story, and one that is highly dependent on historical events, both from the time the narrative is set in and the one that preceded it. The facts that this is not some of the most widely known era by the public, and that the story contains elements of more than one country's history, make showing the context of the story vital. As such, the author reverts to the past multiple times, switching from first to third person every now and then to help us step better into the plot, the time, and the characters. Hoffman succeeded effortlessly.

I, for one, could see the forests in Manhattan receding to give way to skyscrapers, the workers plunging to their death thanks to their bosses' ill treatment, and the colours and magic of the Museum and all other entertainments of the season. In Hoffman's hands, Manhattan becomes a character, colourful and bleary, loveable for its touch with nature and hated for how it allows men to sculpt it to their whims. Multiple whims which Hoffman takes no time to point out without sounding preachy.

However, my favourite point was something else. It was the introduction of Coralie's story and of the Museum. In all honesty, enchanting is the best way to describe it. Although a museum crowded with "wonders" is abhorrent to me, Hoffman made me wish I could walk through its corridors and see the Butterfly Girl, the old turtle, and so many more with my own eyes. Perhaps because she made them fairy-tales come true, perhaps because she made the reader look through Coralie's eyes without noticing it. (As a side note, it should be added that these "living wonders" are portrayed later on as what they are: human. As it should be.)

As for the plot, it was a miscellanea of simplicity and complexity. Weird? Not really. It was complex for there was a net of sub-plots. Every character had their own story, every action a consequence for those who were primarily or not at all involved. In short, it mimicked real life, it was believable, it was simple in a superb way.

With that being said, I must admit there were points in the novel I was not very happy with. The first being the repetition of facts, the second that the main characters did not feel fully fleshed out (though it was impossible not to be compelled by their first introductions and the mysteries of their lives), and the third being the usage of the "insta-love" trope. On this last one, whilst it did not include giving up everything for the other person, etcetera, it did not feel altogether right. Something was amiss. Something as simple as time spent together, as seeing one another's faults.

No book is perfect. There is always a little glitch, always a missing link. It would be odd if this was the first flawless novel. Nevertheless, I did enjoy it thoroughly, and will definitely get my hands on some more Hoffman when I have the time.

“The truth frightens people because it isn't stable. It shifts every day.”
Written by Tess @ Tessellated Tales