A Man Came Out of a Door in the Mountain, by Adrianne Harun 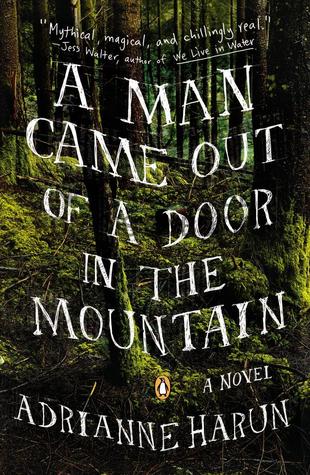 
In an isolated town of British Columbia, young girls, mostly native, begin to vanish from the sides of a notorious highway, the Highway of Tears. Leo Kreutzer and four friends are barely touched by these disappearances—until a series of mysterious and troublesome outsiders arrive on the mountain. Then it seems as if the devil himself has appeared among them. A MAN CAME OUT OF A DOOR IN THE MOUNTAIN  is a seductive and chilling debut novel about what happens to Leo and his group of friends when evil—both human and otherwise—walks right through their town.
Leo and his friends are engulfed in their final days of summer as kids, trying to hold onto what innocence they have left in this poor, hardscrabble logging town in remote British Columbia. A series of dark strangers arrive on the mountain: Kevin Seven beguiles shy Ursie with his fantastical card tricks; bone-white Hana Swann befriends Jackie, and bewitches Brian with ideas of revenge against the tyrannical local drug dealer and neighborhood torturer. As you follow Leo, his friends and their families throughout the novel, you will become entranced, waiting to see just what evil the devil will sow.

Life was never easy for Bryan, Jackie, Leo, Tessa and Ursie, but the day that Hana Swann edges herself into their story marks an irreversible change. Without them knowing, the few words she speaks will haunt their every move from then on. And not just theirs. Other strangers have come with her, who entice and manipulate the inhabitants of the small town they live in. Dark thoughts are turned into action, wishes are fulfilled, monsters disappear, friends leave.

A Man Came Out of a Door in the Mountain is beautifully written. Harun has the marks of a skilled writer, deftly using words to paint a grim and haunting picture of unfulfilled lifes splotched with the shadows of myth and folklore. Her prose gets under one's skin, and the longing for more, for a better, just life will creep into the mind of the reader only too easily. Just like Hana Swann, she surreptitiously feeds forbidden thoughts and whispers for the reader to change, to act, and yet...

I could not get into the characters' shoes. They were extremely realistic despite the magical realism, and I could sympathise with their burdens, sure. It's hard not to, but try as I might I could not care all that much about them. Not in the way I've cared about so many other protagonists in other novels. Indeed, though the novel was fairly short, characters like Jackie did not commit to memory, and I had to stop the reading for a moment to recall who they were. There was something missing.

The plot too felt rather empty. A lot changes during the story, and there is no lack of character development, but I cannot string the novel's events into one cohesive plot. There are plenty subplots: missing girls, starving children, drug addict bullies, dying family members, etcetera, etcetera; but there is very little linking everything together. What's more, many of these subplots lay forgotten somewhere, only for another to take its place and it too be forgotten before its conclusion. Perhaps this was meant to mimic reality (not everything in life is resolved, after all), but there was so much of it that it detracted more than it added to the life-like feeling.

Overall, it's the atmosphere of the book that is best crafted. Plenty of authors could learn from Harun there. But likewise, there is much Harun could learn from other writers on plot construction. Nonetheless, this is an author I'll keep an eye on. Such a strong and unique voice in a debut novel is definitely worth putting her on the radar.