The Fifth Voice, by Paul Connolly 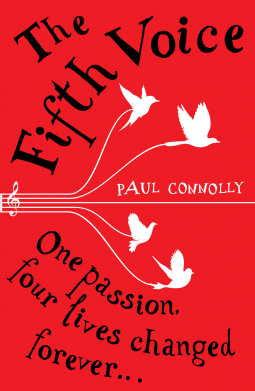 
The lives of four singers are far from harmonious. Danny’s marriage is on the rocks, while Vince is struggling with a debilitating illness. Henry is having a mid-life crisis, and Neil is at war with his father. But when they sing together none of that matters. Because something magical happens. On a mission to compete against the best quartet singers in Britain, they turn to veteran entertainer, Ken, who inspires them to discover a curious vocal technique called The Fifth Voice. Over the course of a year and several adventures, they make discoveries about the power of music and friendship that help each of them shape the rest of their lives. And when they eventually find The Fifth Voice, they discover a prize much greater than the one they imagined. 'The Fifth Voice' is a poignant and comic tale of four lives and a single passion.

The Fifth Voice tells the story of Danny, Henry, Neil, and Vince, four British men whose passion for barbershop singing is enough to alight friendship and keep their problems at bay. For Danny, his wife's one night of infidelity years ago. For Henry, the destruction of his workplace and a wife he doesn't see eye-to-eye with. For Neil, not being the achieving heterosexual son his father wanted him to be. For Vince, the progress of multiple sclerosis.

It begins when Danny joins Vince's workplace, when the two become friends and the latter drags Danny to a meeting of his a capella group, when the four men sing together for the first time, when they decide to become a quartet and take their talent to the national barbershop championships.

It's been a while since I last wanted to finish a book so quickly, since it took me so much effort to plough through a relatively short book. By the middle of it, I was reading it for the sole reason of writing this review, and making sure that whatever I pointed out here wouldn't be undone in the last one hundred and so pages.

My first problem with this book lies in something quite simple. From start to finish, the author barely applies the writing principle "show, not tell". He tells us how nervous the characters are, how hurt they feel. He doesn't show us trembling hands and hollow eyes. Even the actions, a good portion of which were certainly not needed in the story, are written as if they were nothing but routine. It's hard to properly feel for the characters when the writing feels, quite honestly, dull.

Meanwhile, the dialogue wavered greatly in quality. It would vary from pleasantly witty banter (mostly in the form of Vince) to monologues that did not feel truthful at all. At times, it felt like Connolly was trying too hard.

As for the characters, I do commend the author for including some diversity in his book, namely in Neil and Newton Burns, two homosexuals, and in Vince, who did not let MS and the occasional use of a wheelchair get him down. Their voices were also very distinct and they seemed to be well rounded. However, what he did for the men was not enough to surpass his treatment of women.

Women who were nothing but props for the men's tales. The few times Connolly wrote in their point of view, the women spoke of very little but the men they were attached to. They never even spoke to another female. The only instant of some female communication is when Neil's mother is said to be writing an email for a nameless friend. Nothing more. They don't have issues of their own, or if they do, nothing that can't be cured with smiles and kisses from their husbands, boyfriends or sons. I was, quite frankly, appalled. I don't think I've ever read a book where I felt like all women were nothing but objects and plot devices.

In short, The Fifth Voice is an unexceptional book whose one positive point is the obvious love the author has for the subject. If you're looking for a light read with plenty of musical and British jokes, you might enjoy this. However, I dare say there's much better out there.

"You start with four individual voices, but when those voices lock perfectly together, they become one voice, and that's what your audience should hear. One unified, harmonious voice."
Written by Tess @ Tessellated Tales