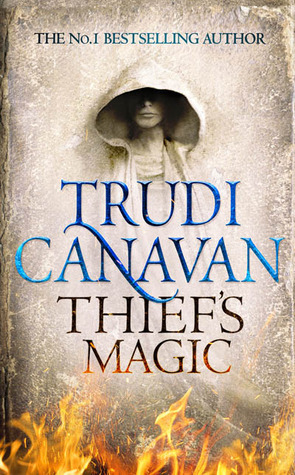 In a world where an industrial revolution is powered by magic, Tyen, a student of archaeology, discovers a sentient book in an ancient tomb. Vella was once a young sorcerer-maker, until she was transformed into a useful tool by one of the greatest sorcerers of history. Since then she has been gathering information, including a vital clue to the disaster Tyen’s world faces.Elsewhere, in a land ruled by the priests since a terrible war depleted all but a little magic, Rielle the dyer’s daughter has been taught that to use magic is to steal from the Angels. Yet she knows from her ability to sense the stain it leaves behind that she has a talent for it, and that there are people willing to teach her how to use it, should she ever need to risks the Angels’ wrath.Further away, a people called the Travelers live their entire lives on the move, trading goods from one world to another. They know that each world has its own store of magic, reducing or increasing a sorcerer’s abilities, so that if one entered a weak world they may be unable to leave it again. Each family maintains a safe trading route passed down through countless generations and modified whenever local strife makes visiting dangerous. But this is not the only knowledge the Travelers store within their stories and songs, collected over millennia spent roaming the universe. They know a great change is due, and that change brings both loss and opportunity.

In a world where industry is rapidly draining all magic, Tyen, an archaeology and sorcery student, discovers Vella, a conscious book bound from the body of a woman. Though obligated to give his findings to the Academy, he hesitates to hand in Vella. There is much he must teach her, much he can learn. Scarcely did he dream this small action will be the beginning of a life-changing adventure that will challenge everything he once held true.

Meanwhile, in a world where magic is scarce, Rielle, a dye maker's daughter, is kidnapped by someone who dared to use magic, a tainted. When she helps the priests catch the tainted man, she both has her five minutes of fame and begins to fear walking alone on the streets. Her family always forgets to send her an escort and so, a painter takes it upon himself to walk her. But there is more to his actions and words than charity. Thanks to them, Rielle will never be the same.

I have always meant to read a Trudi Canavan novel, so I was nothing but ecstatic to be given the opportunity to read this ARC. It took only a page for me to see how much I've been missing out on. Anything I may write from here on will not suffice to describe how wonderful this book is.

Canavan is a master of worldbuilding. In this story, a number of different worlds are explored for different durations of the novel. Although there are some parallels between some (both Tyen's and Rielle's worlds treat women as if they were worth less than men, for example), they are clearly different in geography, climate, culture, history, beliefs, technology, politics, clothing, etcetera. What's more, neither of these lands is treated as if they were worth more than the other. Both have strengths and faults, and both are equally rich.

Although it was the worldbuilding that I enjoyed the most, there was much more that intrigued me. Vella's story, for one, was superb and I cannot wait to know more of it. It's easy to see why Tyen went out of his way to watch over her. It's not every day that you find a conscious book created by a feared wizard centuries ago who stores knowledge of all who touch her. It was this curiosity and the adventurous nature of Tyen's tale that first made me groan when there was the first PoV change. However, by the end of the first Rielle chapter, I was enamoured with her story. Her character development was nothing short of phenomenal, and the romance in the narrative was not only there for a reason but it was organic and real. It is refreshing to see characters whose judgement is not clouded by romance.

In terms of plot, it is clear that Thief's Magic is an introductory novel, meant to set the two main characters on their paths and to teach us about the settings. As such, many more questions are posed than answered. Does this detract from the book? No, not at all. It is only too easy to be immersed in Tyen's and Rielle's personal journeys. Before you know it, the book is over.

Thief's Magic is, much like Vella, a highly intelligent book. Through the cultures it introduces, it points out plenty of problems in our societies, both old and new. The treatment of women and the depletion of magic (perhaps the equivalent of our creativity and energy) being the two issues more thoroughly discussed. This is a perfect beginning for what I'm sure will be an amazing trilogy. I cannot wait for the second book. In the meantime, I'll have to read the rest of Canavan's books. This is clearly an author to read intensively.

"People stay the same. Only culture changes: traditions, ideas about right and wrong, what civilisation is and what threatens it."
Written by Tess @ Tessellated Tales