The Mark of the Tala, by Jeffe Kennedy 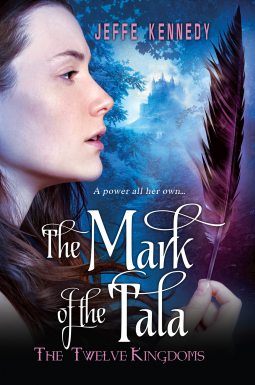 
The tales tell of three sisters, daughters of the high king. The eldest, a valiant warrior-woman, heir to the kingdom. The youngest, the sweet beauty with her Prince Charming. No one says much about the middle princess, Andromeda. Andi, the other one.
Andi doesn't mind being invisible. She enjoys the company of her horse more than court, and she has a way of blending into the shadows. Until the day she meets a strange man riding, who keeps company with wolves and ravens, who rules a land of shapeshifters and demons. A country she'd thought was no more than legend--until he claims her as its queen.
In a moment everything changes: Her father, the wise king, becomes a warlord, suspicious and strategic. Whispers call her dead mother a traitor and a witch. Andi doesn't know if her own instincts can be trusted, as visions appear to her and her body begins to rebel.
For Andi, the time to learn her true nature has come. . .

It's a tale as old as time. Three sisters are born to a King. One a strategist fighter, one an angelical beauty, and one invisible. Andromeda, or Andi, is the latter, something she has never minded. Nobody ever expects much from a wallflower. Indeed, while the eldest learns how to rule the kingdom, and the youngest marries a prince, Andi is left to her own devices, living at the sway of the current. Until she meets a stranger in the woods, with hounds as companions, who means to take her away. She flees, but that brief contact is enough for her world to change.

Suddenly, her father deems her a traitor, an object that belongs to him and him alone. She learns to have been promised to the stranger from the woods long before she had been born, a stranger who happens to be the ruler of a people heard of only in myth: the Tala, ravenous shapeshifters, wielders of dark magic. The king sends her away to keep her hidden. But despite every precaution to shield her, Andi knows that not even being a wallflower will keep him from finding her.

In the beginning of my teenage years, Fantasy Romance was one of my favourite genres, but as time passed by, my preferences shifted to other types of books. It has been a few years since I last read a Fantasy Romance novel. In a way, The Mark of Tala felt like returning home.

The story has your basic Fantasy Romance elements: a female protagonist who is more powerful than she ever thought, a mysterious love interest whom the protagonist refuses to fall for but can't stop thinking of, lusting after the enemy, a few not that necessary sex scenes (but not all, some were needed for the plot), and, of course, secrets. In this, the book is not exactly revolutionary. Nonetheless, it succeeds in the genre. Well, more or less. You see, until the beginning of the said sex scenes, the book read like a Young Adult novel. The presence of such scenes came as a bit of a shock.

But that is hardly its biggest fault. That, I would say, goes to a wobbly pacing and a much too quick resolve of a number of important matters. Another issue I had was that, even though Andi often points out that romance needs not be between a man and a woman, there is no non-heterosexual couple in the story. However, it may be a promise of LGBTQ+ characters to come in the following books of the trilogy. I have my fingers crossed.

I also found it a shame that the author did not delve deeper into the worldbuilding of the Tala. The magic system, the shapeshifting, their culture, and the world they live in itself seems to be truly interesting, and fresh in many ways. The contrast between the way of the Tala and of Andi's people is clear and powerful. Nonetheless, I feel like there wasn't enough exposition of it to make Rayfe's world as black and white as Andi's. Hopefully that will change in the following novels.

One thing you need in a Fantasy Romance novel is a strong voice. Andi has it. Despite a wide number of indecisions and some odd patterns of thought, she does not shy away from narrating her thoughts, for better or worse. She told the story in a way that, even when disagreeing with her, it's hard not to be sucked into the book and want to turn another and another page so it's hard to keep track of time.

The Mark of Tala is not ground-breaking, but it makes for a fun light read that is very hard to put down. I barely ever did.

"Loyalty, like love, is based on trust and belief. I will always be loyal to my homeland and to people who live there. There is good and bad, true, but they are worthy of my belief."
Written by Tess @ Tessellated Tales